Looking to get a band together. Have songs, willing to try anything.

Musicians are a funny type – we’re all pretty much either flakey, weird or both. Finding 2 or 3 other guys to play with is not as easy as it may seem. For years I tried to join a band or at least start something, but it never really stuck.

But that all changed when this drummer Joe answered my ad. The exact details are a bit foggy. What I do remember though is that I sent him a bunch of my demos and nothing really impressed him. These were a few “comfortable” songs of mine that I thought were pretty good, but nothing too spectacular. Of course, when I say “comfortable” songs, I mean songs where I wasn’t putting myself out there and wouldn’t be laughed at. It was never fun for me showing someone a song and never hearing from them again. But that’s kind of the nature of the beast, and as time went on I learned to develop a thick skin by usually holding back myself when I showed people my stuff.

So again, I can’t exactly recall how the conversation turned, thinking to myself this probably wasn’t going to go anywhere, but Joe had asked me if I had anything more – anything a little more personal.

Fuck it, what the hell.

I emailed him a song I was really in love with. A song I had only shown one person beforehand (actually the subject) – who essentially laughed at it.

The song was called “What Do You Think of Me?”, and it was ironically about putting yourself out there even though you knew the outcome would be a failure. I had recorded the demo on my four-track using a keyboard with a shuffle beat, and doubling up my voice for the vocals and harmonies. It was definitely “low-fi”, but poor musicianship and all, it was mine and I was proud of it. So off it went to Joe to see what he thought off it…

To be honest, I don’t remember if Joe took his time getting back to me or if he wrote me right away, but eventually, he did get to me and he told me he really liked it – a lot. And his response was genuine too because as I mentioned before I had a bit of skepticism built up over the years so I could pretty easily tell when someone was bullshitting me.

(Much later Joe would go on to tell me that part of him liked the song a lot and part of him didn’t believe that I was the singer. He had thought it was a little kid singing! I guess that’s what happens when you speed up & double your vocals.)

Anyways, back to the story…

Joe had wanted to get together right away at his Grandma’s house who lived in Wheaton, Illinois. Living in Rockford, I would have to drive over an hour and a half to get there, but it wasn’t a problem. Even though Rockford’s the home of Cheap Trick (a band a lot like ours) there just wasn’t a lot of kids into the same music I was. So driving was not a problem and off I went.

I can remember the next scene vividly as it almost happened in slow motion. I drove up to his Grandma’s house and there was Joe standing in the driveway, strumming a vintage Casino guitar with this goofy smile on his face. 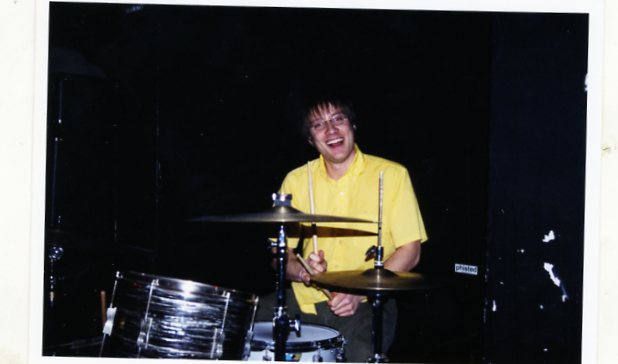 What amazed me about Joe then was that he didn’t look like the average person you’d see around. You know how you look at some people in old photos or movies and can instantly tell it was from a long time ago just by their face? That was Joe. He looked like someone from the ’50s or ’60s, and his voice and mannerisms seemed like that too, I guessed whatever that was supposed to be. I swore I thought I was in a time warp or something – as I talked to him – it was uncanny.

So shortly thereafter Joe took me down to his Grandma’s basement. Wow – it was music Valhalla. I saw a multitude of old guitars, vintage drums, keyboards, and amps all over. Plus the entire basement was decked out in retro shag carpet and wood paneling.

Joe prided himself on being pretty versatile. There’s always one guy in the band who can play every instrument with ease. That was Joe as well.

So Joe and I played. Joe beat away on the drums while I sang and played guitar. We went over a few songs, I can’t remember if they were originals or covers, but it actually turned out to be pretty good… really good actually.

We hit it off right away and knew we had something here. So the very next day out went more ads, and the search continued – this time together. Weeks went by as Joe and I practiced and got to know one another. Things were going really well, but we were getting antsy to play live. Even with Joe introducing me to the Clash’s fantastic London Calling album it was not enough to make the time go fast enough.

When they kick out your front door
How you gonna come?
With your hands on your head
Or on the trigger of your gun?

Sure enough, things did happen, this time though almost by accident. The next person was not someone who responded to our ad, but rather some kid whose ad was posted next to ours. As I read his ad, his bands listed were nearly identical to my favorites, plus he lived mere blocks from Joe, which itself was pretty awesome. I figured he was as good as any to contact. 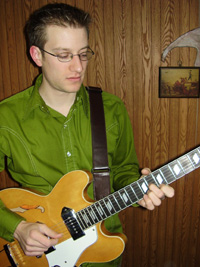